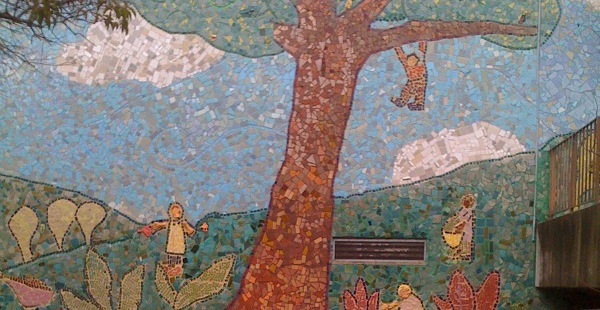 “I’m coming!” Throwing off my painter’s smock, I rush down the stairs to the bedroom to change. At the first spatter of raindrops on the window, I dropped my paint brush, covered my easel and started cleanup.

It has been a long, hot week. A thin layer of dust covers every plant and structure in the village. We need this rain. Through the open window on the landing, I catch a whiff of moist soil. A steady stream drips down the chain drains, plut! plut! plut!, into the clay-lined reservoirs nested at the lowest corner of every structure in Ordinary.

“Come on!” Cheyenne yells from the bedroom. “Get your stompin’ clothes on!” I’m halfway there when she hurries from the bedroom, red kerchief on her head, bib overalls rolled above the knee. Racing to change, I soon join her on the stoop, pause to catch my breath.

“Come on!” Cheyenne says, again, grasping my hand. Like school children, we run through the rain, faces tilted up, tongues out to catch the fresh, cool drops. Others pass us, racing to the north end of the barn. Turning the corner, Cheyenne stops, pulls me back just as a big leaf of hay plops to the edge of the muddy pit.

“You almost wore that!” she says.

“Always wanted to go blonde.” I grin, thinking of the scare-crow with its mop of yellow hay under a battered fedora.

A bamboo fence surrounds this end of the barn and the shallow pit, about thirty by fifty feet and a foot deep. In dry weather, a finely woven net covers the space, letting in sun and air, keeping out birds and critters. Two teenagers hastily rolled the net away and now secure it while two strong-muscled villagers pitch clean straw from the loft. Another on the ground deftly forks the straw evenly across the surface of the pit, making a light layer atop the sand and clay brought here after the last big rains.

Working the straw into the mud, our feet make “gloock” sounds as we lift first one heavy foot, then the other. Gloock, schlock, gloock, magnified by twenty or thirty pairs of feet. Rain drips down my nose, slides into my mouth. It tastes good. Fresh.

Someone shouts out the first bars to an ancient work song. Soon we all sing along, belting out the words, exaggerating the long notes, as we tromp in slow, heavy, rhythmic motion, raising our knees high, bringing our mud-caked legs back down.

We’ve hauled some barges in our day,
Filled with lumber, coal, and hay . . .

Cheyenne loses her footing and grabs my arm, nearly pulling me down with her. Jessica grabs me round the waist in the nick of time. Somehow we manage to stay upright. A big splotch of mud soils Jessica’s red hair, then slides slowly down her cheek. I think to wipe it off, but I’d only make it worse with my gooey hands.

We’re especially excited about this rain, every one of us. If it lasts long enough, and it looks like it will, we will have enough daub to finish the interior walls of Peter and Livia’s cob and straw-bale house. They’re getting married in September. During the last hard rain, in April, we erected the exterior walls, followed soon by a living roof. With this downpour, we should have more than enough to finish the interior walls and shelving.

Later, Merilee and Cheyenne will assemble a crew of teens and younger children to sculpt and smooth the edges around the door lintels and windows before the cob sets hard. With a little luck, we’ll get to see some of the artwork Livia and Peter have chosen for their home.

All summer long, the students and their sculptor teachers worked with the young lovers on the ornamental designs they plan to work into the cob, inside and out. Having practiced and refined the designs for months, the crew, now eagerly tromping with the rest of us, chatters excitedly about applying them to the walls and cabinets.

We all turn. Tracey, half buried in mud, wobbles on one leg. Barely able to hold the other above the surface, she’s grown six inches of mud foot.

Jonathon steps over, scoops her up in his hard-muscled arms and rubs the mud off her feet in one motion like it’s whipped cream. He sets her down, shakes the mud from his hands, and rubs the residue on his overalls.

“Holler when you need another foot wipe,” he says, with a wide grin, squinting as raindrops run off his eyebrows onto his cheeks. It is good to see Jonathon happy again, his face free of the pain that marked it for so long.

Despite the downpour, it takes time to trample enough straw to hold the sand and clay together when it hardens. Thankfully, we’ve had spatters here and there the past few days, and the building crew, anticipating a big rain, had the soil and clay well watered. As we work, I am grateful for the heavy rain, continuously washing away the sweat and mud from my arms and face.

Just as our band begins to show signs of fatigue, Benjamin, who supervises the house construction, steps inside the enclosure and gives the signal to the loft that we’ve enough daub to finish the house. The loft crew set aside their pitchforks, give the thumbs up and disappear, reappearing downstairs at the barn door, laughing at sight of their mud-soaked neighbors.

Dry, they recoil a moment before stepping into the rain, then laugh again as they grab shovels to fill waiting wheelbarrows from one end of the pit while we continue our slow-motion dance at the other. From here on, the strongest workers shovel, wheel their heavy barrow loads across the village and dump them on canvas tarps inside the house. There the building crew wait to build and mold the interior walls, cob benches and a stairway. Peter and Livia’s house plan includes a second story, like ours, with a balcony overlooking the garden.

My legs ache from stomping the sticky goo. They itch too, from the mud and minute straw cuts. The children seem oblivious to such minor irritations, laughing and shouting. Some of the teenagers get a little wild, “accidentally” flinging mud at each other, seeing who can come up with the best Rorschach designs. Merilee, Chey and I take a break and head for bales of hay in the dry barn.

“Whew! That wears me out!” I plop down hard, knees giving way too soon.

“But it’s so much fun,” Chey says. “Look at Ruby! Eighty-three and stomping like a rain dance.” Ruby is my mom. Through the barn door, I see her, sure enough, holding up her skirt in a slow motion mud-foot dance. Seeing us, she waves and keeps on dancing.

“She’s smarter than we are,” Cheyenne says. “Paces herself.”

Ruby likes the outdoors more than in. She often takes off hiking before sunup, returning after sundown with a knapsack bulging with roots and herbs.

“That’s my mom,” I smile, loving the tall woman with the strong, calloused hands.

“The sun’s coming out,” Merilee says. “Let’s catch a rainbow!”

By the time we reach the barn door, the downpour eases, trickling to a faint drizzle. Sun lights every inch of the landscape to the northeast with a yellow and white glow, while behind us, the sky roils with dark clouds. A slight breeze sends goosebumps popping on my wet skin. Fresh scents tickle my nose.

“There it is!” Tracey shouts. We turn and watch the rainbow grow from faint to brilliant, it’s arch expanding gradually till it spans the valley.

Sudden hush, the steady drip of water off rain-soaked tree branches and eaves.

Cheyenne takes my hand, then circles my waist.

I give thanks for this loving woman next to me.

Tracey takes my other hand, pulls her mom to her, who already has her arm around Ruby’s waist.

In front of us, and to the left, Jonathon puts an arm around the shoulder of his son Jacob.

I give thanks for the love in the world, for the joy, for the peace that is ours every single day.

The infinitely sweet notes of a meadowlark trill across the yard and, miraculously, the colors of the rainbow deepen.

This site uses Akismet to reduce spam. Learn how your comment data is processed.

Welcome to the Village of Ordinary

This is a work of fiction, a vision of what our world might be like if we humans chose to live in harmony with the Earth and with each other.

Read the story from the beginning

Want to read the story in chronological order, starting with the very first post? Begin with Wake. When you reach the bottom, and after you've left a comment, if you choose to do so, which I sincerely hope you will, follow the link to Sit, which is the second entry, and so on.

All text and images, unless otherwise noted, © L. Kathryn Grace. All rights reserved.
* 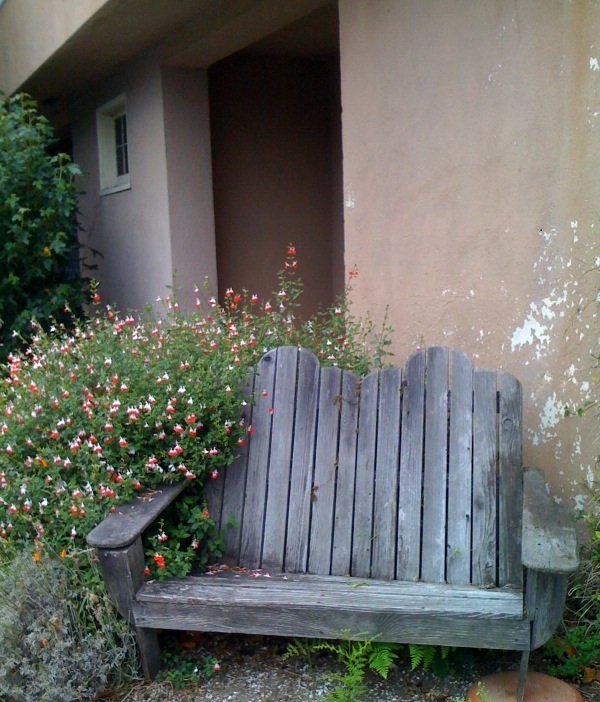 Welcome. Come in to my garden and sit a spell.© L. Kathryn GraceAll rights reserved

The Village of Ordinary is a work of fiction, a vision of what life could be like if we chose to live in a world without greed, without hatred and anger, a world of compassion, where every child born is wanted, deeply cherished and nourished to fulfill her or his dreams and potential.

The story is told through the journal of one ordinary woman who grew up in this world, raised children of her own, and lives with the love of her life, among family and friends.

Their village, Ordinary, is typical of, though not identical to, villages all over the world, villages where people choose every day to live in harmony with the Earth and each other. This is a vision of what our world might be like if we choose.

Meet and learn more about the villagers, here, where you'll discover all Rose has revealed about each one to date.

For general inquiries or to request permission to use media or portions of the story and/or supporting information send an email.